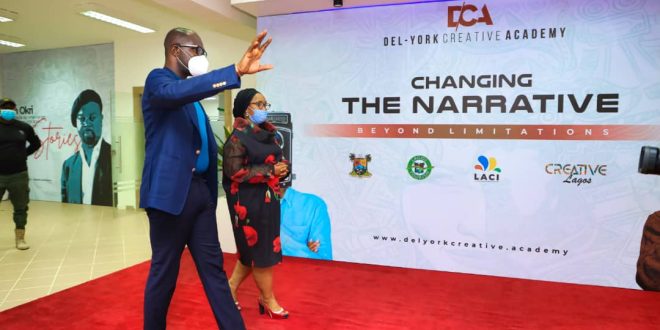 Speaking at the ceremony held recently at CIG Building, Ligali Ayorinde, Victoria Island, the Commissioner for Tourism, Arts and Culture, Mrs. Uzamat Akinbile-Yussuf, said the initiative was to further raise young skilled talents to enable them become useful to themselves, the community and contribute their own quota to the development of the State.

Akinbile-Yusuf lauded Del-York Creative Academy for consistently empowering youths within and outside the country in different aspects of filmmaking,  through exposure to modern film production techniques and the use of the latest equipment in the industry.

The Commissioner noted that the State Government has invested huge resources in capacity enhancement in order to bring out the best in the graduands, urging them to ensure that the seed planted in them germinates into a shining example for generations to come.

She further congratulated the trainees on the completion of the programme and encouraged them to continue their drive towards success in their chosen career paths.

The Permanent Secretary, Ministry of Tourism, Arts and Culture, Princess Adenike Adedoyin-Ajayi, also congratulated the students on the milestone, promising that the State government will continue to work with the Academy to harness the potentials of the creative industry in Lagos.

The President/Founder, Del-York Creative Academy, Mr. Linus Idahosa, described the graduation ceremony as an indication that new stars have been born into the creative industry.

He said the graduating students were presented with the Del-York Creative Academy Higher Diploma Certificates as an accreditation of excellence in the African creative industry.

Idahosa pointed out that the graduates now possess the power to create change through storytelling, saying “All our graduating students here today are refined products that have gone through the furnace to come out as purest gold”.

“This process was to ensure that they are not just creators, but are game-changers. We have handed you the tools to change your personal narrative and your lives, such that your families and this nation will become proud of you. So, go out there and make that difference”, Idahosa added.

Other speakers at the occasion including Chairman of GAC Motors in Nigeria, Chief Diana Chen and the President, Directors’ Guild of Nigeria, Mr. Victor Okhai, charged the graduating students to impact their newfound skills on transforming the Nigerian creative space, appreciated the short films produced and described the presentations as impressive, outstanding, top-notch and of good quality.

In his contribution, the Academy’s Lead instructor, Grant Housely, told the graduates that the success achieved is a further call to brace up for the challenges ahead with the energy it deserves.

No fewer than 100 successful trainees from DCA, who received the Higher Diploma Certificates, have undergone impactful training fully sponsored by the Lagos State Government under its Lagos Creative Industry Initiative (LACI) programme.