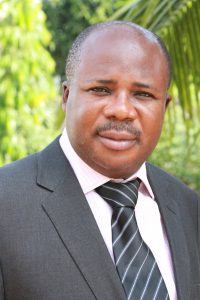 Mr. Babatunde Olaide-Mesawaku was born in Badagry, Lagos State in the early sixties. He is from a very humble parentage. He had his early education at Our Lady of Apostle (OLA) Primary and Methodist Modern School respectively in Badagry before proceeding to Egbado High School, Igbogila in Ogun State where he obtained his West African School Certificate (WASC) in 1982. He thereafter enrolled for Higher School Certificate (HSC) at Anwar-UI-Islam College, Agege, Lagos and obtained his HSC in 1985.

In his quest for further Studies, Mr. Olaide- Mesawaku also obtained an M.A Legal Studies, M.A Museum Studies as well as a B. Tech (HND) Tourism and Travel Management.  He is currently a student of Diaspora Studies at University of Ibadan.

He was employed into the Lagos State Local Government Services as information/Public Relations Officer in 1991 and posted to Badagry Local Government but subsequently converted to Administrative line in 1995.

A resourceful personality who has served as Personal Assistant to Badagry Local Government Chairmen between 1992 and March, 1996 and between 1997 and 1998 respectively. He has also served on various Committees set up in the Local Government by past administrations.

He was the Council Manager for various Local Government and L.C.D.A’s in Lagos during the period of 2009 – 2016 before been transferred to the mainstream Ministry of Works and Infrastructure in the Administration Department before his recent appointment as the Permanent Secretary at the Ministry of Tourism, Arts and Culture.

With a deep passion and interest in the literary field, he is a co-author of the book, Badagry: The Cultural Heritage. Babatunde Olaide-Mesewaku has also written various articles in the local newspapers with discussions on salient social, economic and political issues on Badagry. He was instrumental to the floating of the Local Government Newspaper BADAGRY HORIZON in 1997.