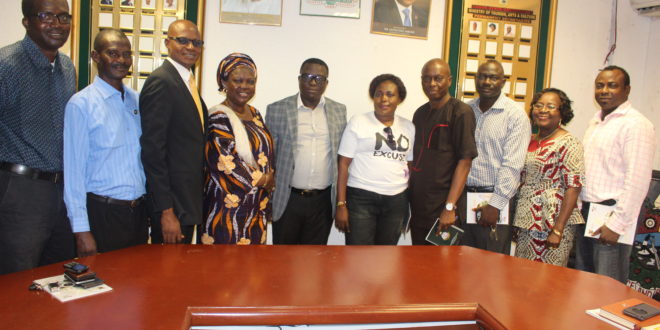 Lagos State Government has expressed its intention to replace the existing statues of Late Chief MKO Abiola, the acclaimed winner of the June 12 Presidential Election and that of human rights crusader, Chief Gani Fawehinmi with life size statues of the two political icons.

The information was disclosed during an interactive session between the Ag. Commissioner Tourism, Arts and Culture, Mrs. Adebimpe Akinsola and members of Civil Society groups at the Ministry recently.

Akinsola said the decision to upgrade the two statues was inspired by the inclination of His Excellency, Mr Akinwunmi Ambode for the arts and a desire to have bigger life-size statues of the two personalities.

While also speaking at the interactive session, the sculptor – Mr. Olurotimi Ajayi – informed the gathering that the remodeling work on Chief MKO Abiola’s statue commenced late January 2017 but could not be completed before the set deadline because the proposed structure is massive and would be the second largest in Africa, after that of Nelson Mandela in South Africa.

He envisaged that the statue will be ready for commissioning by August being the next post-humous birthday of the late Chief MKO Abiola.

In his contribution, Comrade Gbadebo Fagbemi of the Centre for Democracy and Change expressed appreciation for the government’s initative and reiterated the support of the civil society groups for the good work the Governor has done in the State in the past two years in office.

He promised that the groups will visit the studio where the sculptural works are being done to monitor progress of the project and confirm the sculptor’s claims while enjoining the artist to ensure speedy completion of the projects before August 2017.

The Permanent Secretary Ministry of Tourism, Arts and Culture, Mr. Adewale Ashimi appreciated the groups for the visit to the Ministry and promised not relent in the efforts to bring all stakeholders on board for smooth implementation of the two projects.